It’s a rare pleasure to meet another Rachael — not a Rachel, mind you — even if it is over the phone.

Cue Rachael Taylor, who plays Trish in Marvel’s Jessica Jones, the Ann Perkins to the titular character’s Leslie Knope. You know, if Parks and Recreation was a dark, moody drama about superheroes and combating the patriarchy.

“I don’t think we do ourselves any favors by putting this perfect version of best friends on screen,” Taylor says, in a light Australian twang. “It’s so much more interesting to show a relationship that has a bunch of different, sometimes dark dynamics going on under the surface.”

We chatted more with the actress about Trish’s ambition, stories about women, and why she’d prefer to be relatable — not likeable.

The second season of Jessica Jones has really come at a pivotal time: we’re smack dab in the middle of #MeToo, Time’s Up and talking about inclusion riders.

As some of the stories that these women have bravely put forward started coming to the surface, Krysten (Ritter) and Carrie-Anne (Moss) and I were all texting each other, going, “Oh wow.” Melissa (Rosenberg, the creator and executive producer of the series) wrote the show two years ago, so I think it really speaks to the fact that she’s able to tap in to what’s going on in culture in such a meaningful and relevant way. Jessica Jones has really always had the kind of backbone of empowerment and bravery for women. And I think what Melissa put on the page two years ago is possibly even more relevant today.

So many outlets have crowned Jessica Jones as the superhero of the #MeToo movement, and it fits.

People often ask me if I was a comic book fan before. And when I was growing up, I didn’t have a character like Jessica Jones to watch. I’m incredibly proud to be part of a show that puts a female character front and center who is strong and brave and messy and complicated and wounded and damaged. And angry.

It’s important. People need to be able to see themselves represented on screen. Female stories and diversity — it has to be an inclusive environment because the stories that we all have as humans are so rich and so wonderful. If you stick to just telling stories by, like, dudes, then you’re missing out on the wealth of incredible emotion and power and ferocity that female stories can really bring to the screen. 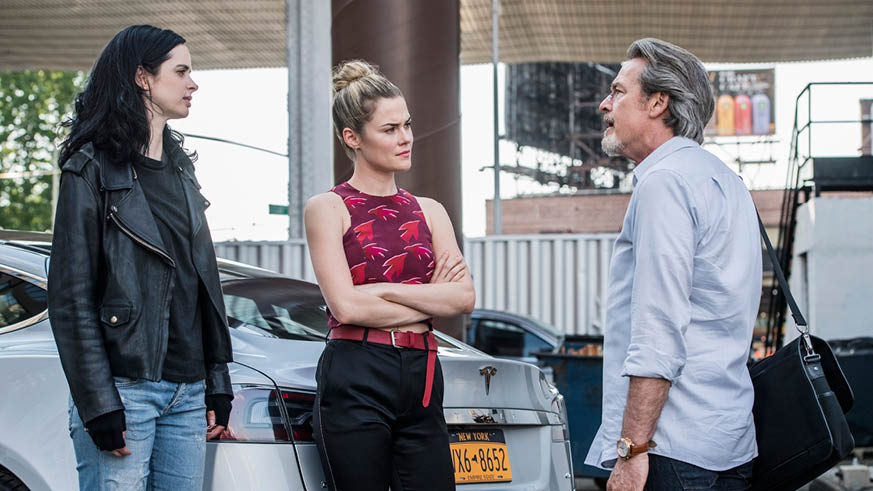 The show also focuses so much on the friendship between Jessica and Trish. Female friendships are really complex and it’s so refreshing to see that on screen.

It’s one of my favorite parts of the show. In lots of ways, I think it’s kind of the heartbeat of Jessica Jones. It’s not this sanitized version of female friendship. It’s complicated and it’s messy — and there are shades of jealousy and shades of competition that are in a way, very real.

I love that Jessica Jones has female characters that are all very different. There’s not just one version of a woman. They’re all multifaceted, and the show is all about how they occupy space and how they get agency and all the complications that come with that. I think it’s really cool and kind of important, you know?

Trish is super trigger happy this season which I kind of love. Did you have any mishaps on set? I know Krysten got a little bit beat up.

I got super fit for season two in a way that was really, really fun and so incredible and empowering. And some of it kind of stuck, actually. It’s done something really interesting to my mind set in term of how I carry myself. I stand up a little taller.

Trish has so much ambition this season and she really wants to be seen as a hero. Where is that coming from?

On the surface, Trish really looks like she has it all. But the truth is, Trish wants to be more than what she is. She hates to be vulnerable. She wants power, she wants to take up more space in the world. [This season] really explores what lengths she’s prepared to go to get what she wants. And she’s not always likeable in that quest which is cool. [Having] less focus on female characters being likeable and more focus on them being relatable is exciting.