Stormy Daniels sympathizes with men during the #MeToo era In an interview with New York Magazine’s Olivia Nuzzi published Sunday night, Stormy Daniels opened up about her alleged 2006 affair with President Trump, which led to a reported $130,000 payoff ahead of the 2016 presidential election and a resulting — and very public — defamation lawsuit.

The interview is part of the magazine’s Women and Power series, described as a look into “women and their relationship to power — how they get it, how they lose it, how they wield it, what they sacrifice for it, and, ultimately, what they hope power will help them achieve.”

Towards the end of the interview, Daniels admits that she sympathizes with men in the #MeToo era.

“I feel sorry for men right now,” she said. “It’s not a good climate to have a penis. It’s actually sexist to accuse men as a whole of something, you know?”

“It’s just — I don’t know,” Daniels continued. “A guy can’t even open a door for a lady without being called a pig.”

When Nuzzi told her that this comment will anger a lot of women, Daniels replied, “Oh, finally I’ll have good tweets.”

Daniels said during the New York Mag interview that, now, large groups of women go to her shows.

“They are loud, and they’re angry. They’re like, ‘F— Trump.’ Or they’re crying,” she said. “People are grabbing me and giving me money, and then later they’re sharing their personal stories — women are saying, ‘I was molested or I was raped, and you’ve given me the inspiration to file charges against my boss.'”

As one woman who went to see Daniels perform told The Sacramento Bee earlier this month, “She has the guts to talk about her experiences and her views, and that’s not easy right now in this political climate. I wanted to support her right to have a voice, and I didn’t want it to be all creepy guys throwing ones at her.”

Daniels wished to clarify that her alleged incident with Trump does not make her part of the #MeToo movement.

“I’m not #MeToo. No one forced me,” she told Nuzzi of her supposed night with the president. “I’m not a victim. It’s really annoying. It takes power away from the people who’ve been assaulted or raped or sexual-harassed by their boss.”

“I would have these days where I would come offstage and just want to cry. About every two or three weeks I would have a breakdown. What if I let everybody down?” https://t.co/zkf4xB6dVJ #WomanAndPower pic.twitter.com/YmwKEfJZoM

Daniels has made similar comments in the past.

During her 60 Minutes debut back in March, she said, “This is not a ‘Me Too.’ I was not a victim. I’ve never said I was a victim. I think trying to use me to further someone else’s agenda, does horrible damage to people who are true victims.”

Daniels, however, does disclose in her new memoir, Full Disclosure, that she was raped for two years by a man who lived next door to a friend. She was 9 years old at the time and says, too, that she was pressured into not telling the police.

“What was ingrained into me was the expectation that I would not be believed if I ever asked for help,” she wrote. 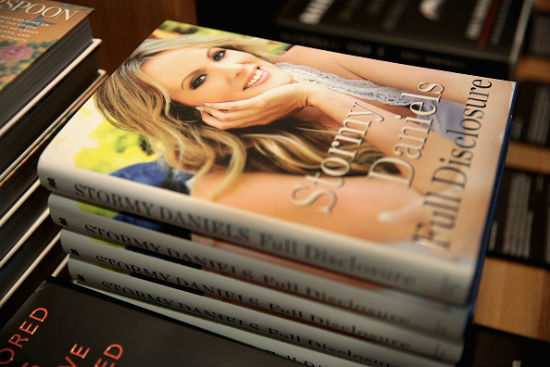 Is Stormy Daniels a feminist?

Op-eds published online have praised Daniels for her “heroism.” One from March was titled, “Stormy Daniels is a feminist heroine.”

Another, ran by The New York Times in August, was called, “Stormy Daniels, Feminist Hero.”

According to Daniels, though, she is not a feminist (and she doesn’t want to be a hero either).

She’s really missing the connection between feminism and why so many women have embraced her and regard her as someone who’s voice matters equally. That’s a change, and it’s been striking to observe.

“I don’t think I necessarily try to help women, I just try to help people,” Daniels said. “I’m not a feminist.”

She told Nuzzi, that she doesn’t think “what’s between somebody’s legs” should matter.

“I used to be really annoyed that people would be like, ‘Oh, Stormy Daniels is the best female director.’ And I’d be like, ‘What does my vagina have to do with it? She hasn’t directed sh*t.'”