‘The Amazing Johnathan Documentary’ proves nothing is as it seems It should be a rule of thumb that a documentary that covers a subject without anything going wrong along the way is typically not the most interesting experience for the viewer. Even though it’s great for the rest of us, this kind of bargain can put the documentarian through hell and back. This is exactly what happened to filmmaker Ben Berman with his new film “The Amazing Johnathan Documentary,” now on Hulu. 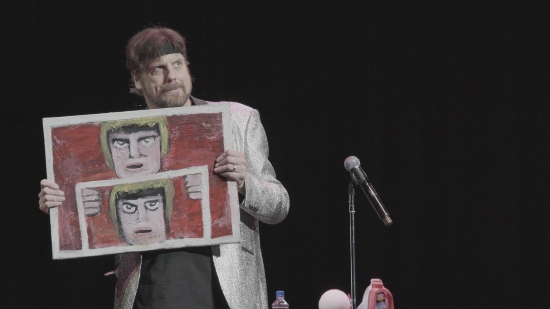 Berman was first aware of The Amazing Johnathan after watching one of his legendary and unhinged performances on Comedy Central when he was around 13 years old. If you are of a certain age, you have probably seen them, too. The magician curses and makes it seem as though all of his tricks go dangerously wrong onstage when, in fact, that is the act itself. As Berman grew older, he forgot about the performer until news that the performer had been diagnosed with the fatal heart disease, cardiomyopathy, surfaced and that the hugely successful Vegas magician would be gifting some of his tricks to younger magicians after his inevitable passing.

“I thought that was a pretty beautiful thing. He wanted his legacy to live on after he was gone and live on through other magicians. And I thought that was really cool,” Berman told me over the phone. From there came his idea to document Johnathan in his current moment, and he got the opportunity to follow the magician as he began to make his comeback to the stage.

But of course, Johnathan would prove to be a more difficult subject to cover than Berman would ever imagine. The magician has been open in his daily use of crystal meth and while Berman and his crew had their cameras going, Johnathan alerted them that there were, perhaps, multiple documentary crews that would be making similar films along the way.

This throws a wrench in Berman’s plan, as his access to his intended subject begins to decrease as these “crews” vie for camera time. But, are we sure they are real or is this actually the work of one of the world’s greatest tricksters? That is the question that Berman was then forced to pursue the answer to as the film takes its unintended turn.

One question is raised throughout the film over and over again: If Johnathan was only given one month left to live, how has he stayed alive for the four years since his diagnosis? Could it be that this is the biggest trick he has ever pulled? Were these other documentary crews only diversions so that Berman would not get close enough to find out? Could it be that Johnathan’s real disease could be his drug addiction?

“That’s a good question,” says Berman. “A lot of people ask me, ‘Do you still believe that he’s faking his death?’ And I absolutely say, no. I’m not still questioning if he’s faking it or not. I think the more accurate question is, why is he dying? What is this heart cardiomyopathy actually about? Or what caused it? Is it possibly … you know, smoking meth multiple times a day for 25 years is certainly not good for your heart. Could that have caused what he claims to be cardiomyopathy, or what was diagnosed as cardiomyopathy? I think there’s a good chance of that. Which is a kind of a chicken-or-the-egg situation. Was he predisposed to heart disease regardless of drugs, or without drugs? That could be the case. Was he predisposed and would’ve got cardiomyopathy anyway? But in addition to that, smokes meth, which certainly can’t help. I think that’s a great possibility as well. Or did the meth cause the heart disease? I don’t have those answers, but I would imagine that certainly that they’re linked.”

Without spoiling the head-scratcher of an ending, Berman ends up getting some of the answers he was looking for. And while he may have been driven to the brink of insanity by his subject, the ride that he went on only helped to cement the film as a thrilling viewing experience.

“It was certainly a wild ride that was at times either uncomfortable, upsetting, worrisome or just a huge, huge bummer,” explains an exasperated Berman. “But I think that’s part of the value of the movie. That it actually kind of either shows, explores or unpacks not only the story of Johnathan, not only the Johnathan element of this documentary. But it unpacks the making of a story like that. And all the questions and all the ups and downs that come along with being able to try to — at least attempt — to tell that story.”

Check out the trailer for “The Amazing Johnathan Documentary” below…