This weekend, fans of the beloved Jim Henson film “The Dark Crystal” will rejoice as they will be able to spend all of Labor Day weekend binge-watching the brand-new series, “The Dark Crystal: The Age of Resistance” on Netflix starting this Friday. The 10-part series sends fans back to the land of Thra for an epic quest that acts as a prequel to the original all-puppet 1982 film.

“What’s so amazing about the Hensons is they bring so much art into what they do,” – Keegan-Michael Key on the artistry of “The Dark Crystal: Age of Resistance” 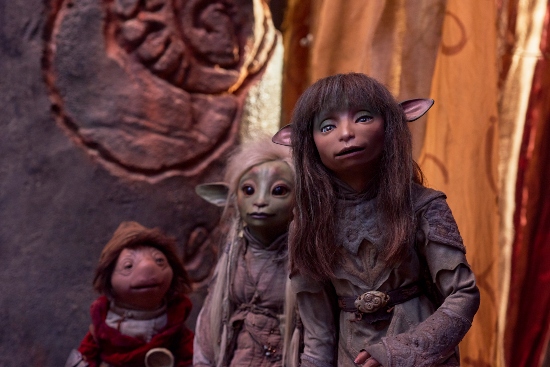 In the new series, British actress Nathalie Emmanuel, better known for her role as Missandei on “Game of Thrones,” lends her voice as one of the show’s characters, Deet, one of three Gelflings — along with Rian and Brea, played by Taron Egerton and Anya Taylor-Joy, respectively —  who set out to defeat the evil Skeksis and their quest to use the Dark Crystal’s powers for evil. Emmanuel was completely blown away upon seeing her voice being transported into this world created by the unique imagination of the Henson Company.

“It’s so phenomenal, the puppeteers are the real stars of this show,” the actress told me. “The people that make the sets and the puppets, that artistry is just genius. Don’t get me wrong, voicing these characters is really difficult because stuff is synched that you have no control over as a performer — unlike animation, where they can change it. So there are many challenges that come with that. But, I watched it and was blown away by the world that they created. Of course there are modern technologies that can be used, like CGI and special effects, but it was minimal. The real beauty is in the puppets and within the sets. It was filmed in a way that allows for that.”

With all of this praise for the details that went in “Dark Crystal,” and after being in another iconic fantasy property that relied heavily on CGI to bring its world into reality, I asked if Emmanuel could settle the score once and for all: Which is better, puppetry or CGI?

“Puppetry, hands down!” she says with a laugh. “They’re very, very different skills that require a lot of dedication and require amazing artistic ability. But to make a puppet emote is just fascinating to me.”

Another actor who is very familiar with being attached to wildly successful fantasy properties is Jason Isaacs, who plays The Emperor of the Skeksis. While the pressure of entering such a cherished world for fans may be a daunting task for many, Isaacs has found that the power of the fandom surrounding the properties he has worked on has given him much more appreciation for the art of storytelling.

“The last few years, just by chance, I’ve had something to do in a lot of fandom,” Isaacs says. “With ‘Star Trek,’ ‘Harry Potter,’ ‘Star Wars,’ and now this. It’s incredibly exciting and always reinvigorating for me, after decades as an actor, to be reminded how powerful stories are. … The last few years, I’ve gotten to interact with fans and in a way, it’s lit the pilot light inside me and reminded me how important stories are in our world.”

The hilarious and always infectiously energetic Keegan-Michael Key also stars in the show, as the Ritual Master, one of the Skeksis. For Key, his love of “The Dark Crystal” and all things Jim Henson can be traced back to early in his life.

“What drew me to it as a child is that the world became so immersive by virtue of the fact that all of the characters were puppets. You weren’t linking in to a human! What’s so amazing about the Hensons is they bring so much art into what they do that you fall in love with a small piece of vinyl, or plastic, or rubber. You get really invested in what this creature is going to achieve or not achieve, or win or lose, or how that’s going to work. But what really sucks you in is you’re really entering into another world. There’s no humans in this world, and I think that’s what  drew me in.”

Key is certainly one of the more agile and acrobatic comedic performers around, and with the puppeteers of the show doing the heavy lifting of propelling the action, I ask if Key found himself acting out the dialogue on his own while lending his voice to the character.

“I always do!” says Key in thunderous affirmation. “My favorite is when I do voice-over work and I walk into a room and the room is this size [points around the room with hands] and go, ‘[diabolically laughs] Strap a mic on me!’ If they need you to land, I like to jump and land as opposed to trying to fabricate it. I continue to be as physical an actor and make choices as physical as I can even if I know I’m not going to be seen.”

“The Dark Crystal: The Age of Resistance” premieres on Netflix this Friday, Aug. 30.

Check out the trailer for “The Dark Crystal: The Age of Resistance” below…