The Irish have come a long way in New York City, from being persecuted as the latest wave of immigrants during the 1840s potato famine to being the most popular “brand” of pub in the city.

But there are still some establishments founded by Irishmen and run in the way they would be back in Ireland. These are New York’s absolute best authentic Irish pubs when you’re looking for that cozy but lively atmosphere, a pint of Guinness in a room paved with sawdust and live music from the hills of Erin. 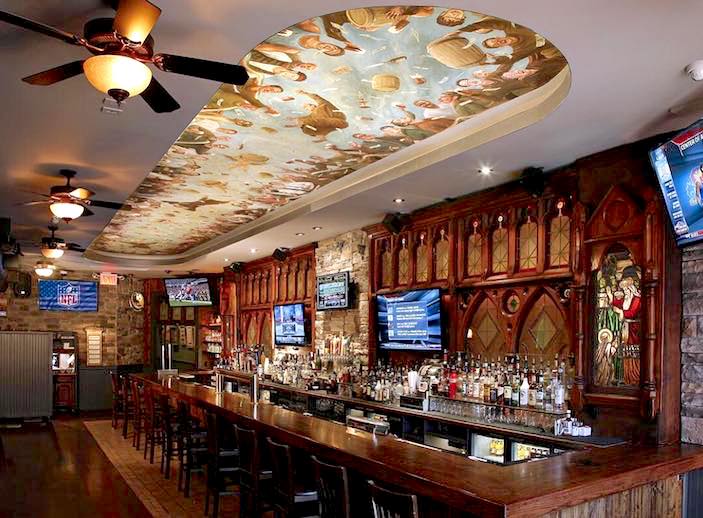 The mural of angels bringing down beer from heaven is your first sign that The Wicked Monk takes drinking culture just a little more seriously than most pubs. Much of the gothic cathedral interior came from an actual monastery in Ireland, with the bar backlit by a row of stained glass windows so it feels (appropriately) like approaching the altar to receive Communion — except instead of a wafer, the menu is packed with Irish favorites. Traditional music begins at 5 p.m. on Sundays, though the calendar is always packed with live acts. 9510 Third Ave., Bay Ridge, Queens

It doesn’t get more authentic than being named after an Irish folk song. This Gramercy pub was first established in 1895, but got its Tudor-era makeover and name when the Purfield family took over in 1964 after arriving from Dublin and Galway. Molly’s Shebeen has a wide range of Irish beers on tap, but is revered for having the best pint of Guinness in the city. The hearty bar food (the burger is exceptional) will keep you going all night. There is always a wait, but it’s worth it. 287 Third Ave., Gramercy

Perhaps no Irish-American pub in the city is more beloved than Peter McManus Cafe, named for its founder from County Longford who opened it right after Prohibition was repealed in 1936. Still run by the same family, it’s one of the most welcoming bars you’ll find in the city and has touches both traditional (carved mahogany bar) and quirky (kelly green booths) while keeping the grub a step above, especially the award-winning burger. 152 Seventh Ave., Chelsea 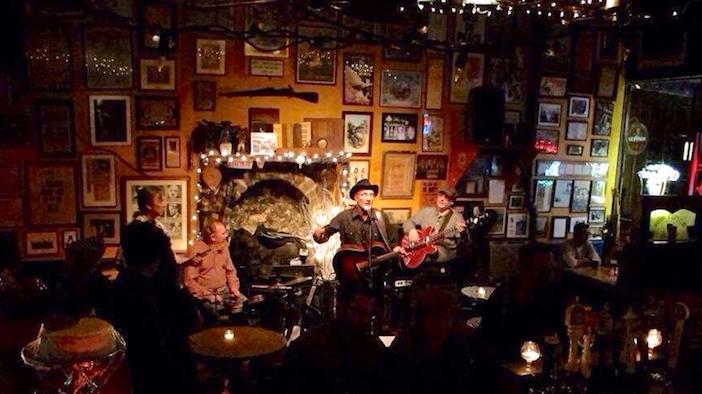 No night out in Ireland is complete without live music, poetry or dancing (though preferably all three), and this Bronx institution includes a 56-seat cultural center dedicated to showcasing talented New Yorkers. Founded in 1991 as a cafe for artists, An Beal Bocht is now as friendly a place for a pint as an Irish curry in a nostalgic room crammed with old photos. It’s also starting new traditions: On St. Patrick’s Day, the bar hosts what it claims is the world’s shortest parade. 445 W. 238th St., Riverdale, Bronx 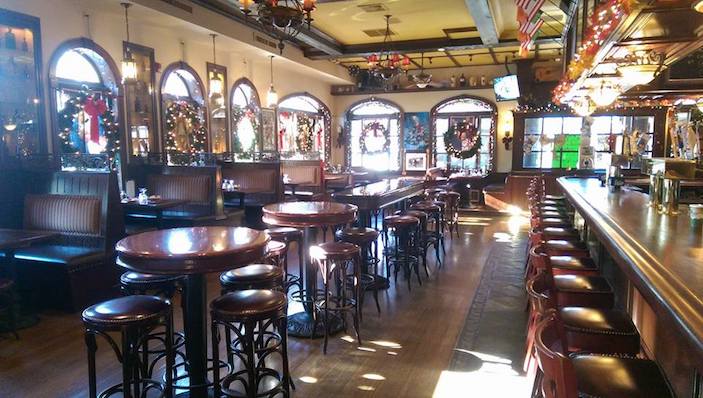 Founded shortly after the 9/11 tragedy, The Rambling House takes its mission to be a welcoming and boisterous place seriously. Bedecked in Irish kitsch with tons of flags and shamrock decor, the main bar room has tons of TVs and a lively crowd. The large kitchen turns out an expansive menu of classics like shepherd’s pie as well as pastas and steak. 4292 Katonah Ave., Riverdale, Bronx

You’d be forgiven for thinking you’d been transported to Ireland when you see Donovan’s Irish Pub, looking like it had been plucked from a small Irish town and dropped into Queens. Inside, the warm wooden walls and exposed ceiling beams are pure old world charm, while their menu is better known for burgers and sandwiches. 57-24 Roosevelt Ave., Woodside, Queens 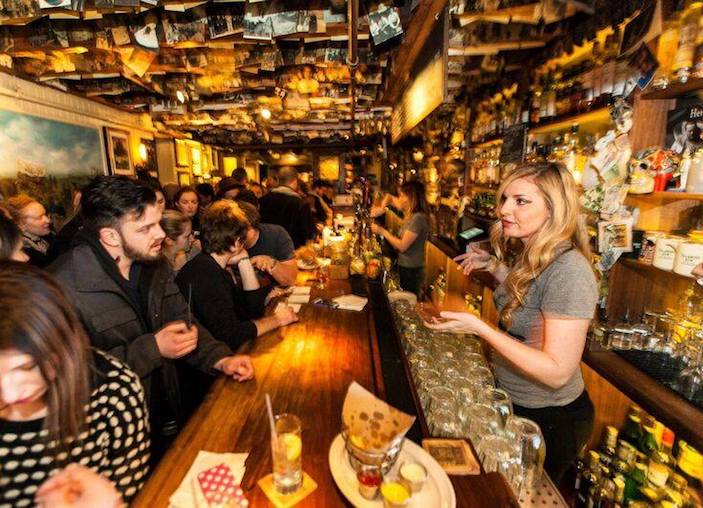 Crowned the World’s Best Bar in 2016 — just a year after it opened — The Dead Rabbit does indeed exceed all expectations. Started by two boys from Belfast and named for the Irish gang that used to run Lower Manhattan, the bar is split between the more traditional taproom on the ground floor, where beer (Irish and otherwise) rules alongside a worldly cocktail menu, and a second floor dedicated to showcasing the whiskeys of the world. 30 Water St., Financial District 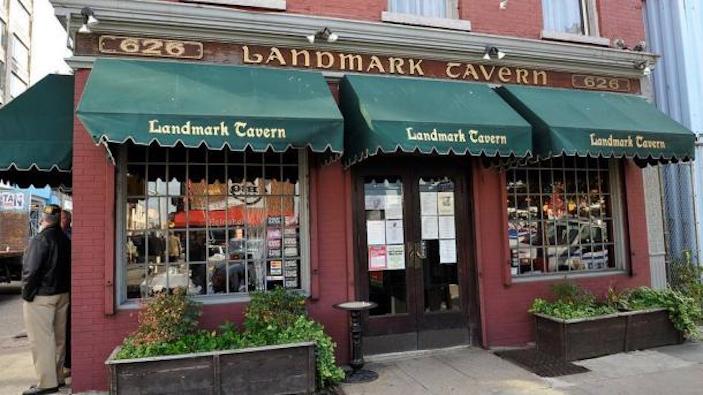 Usually when an old space gets an update, the charm that drew regulars there for so long gets wiped away along with the accumulated dust. Not so with the Landmark Tavern, which has been serving Irish fare since 1868. Its 2005 renovation turned it into a refined destination, with a lively bar in front and a white-tablecloth dining room to savor its authentic food. On Monday nights from 8-11 p.m., if you know the songs you’re welcome to join in with the band playing Irish classics. 626 11th Ave., Hell’s Kitchen 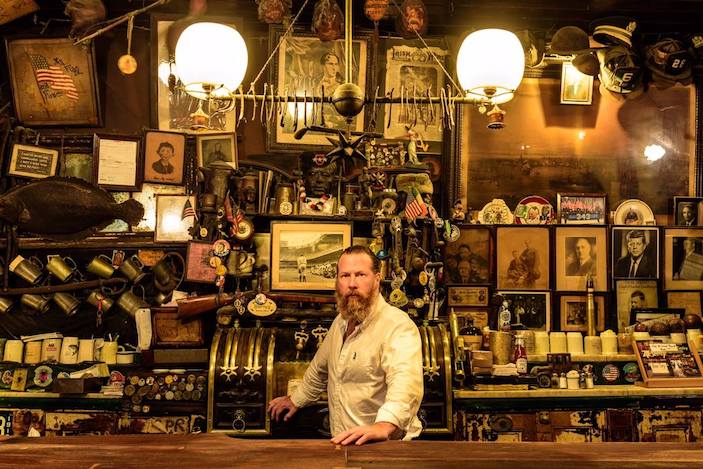 New York City’s oldest Irish pub still offers the same authentic experience it did when it opened in 1854. McSorley’s Old Ale House wears its history on its walls with portraits, pewter mugs and even commemorative plates crowding every surface. While it’s been modernized somewhat — women began to be allowed in after 1970 — your beer choices remain limited to just two: Light or Dark. 15 E. Seventh St., Astor Place

A post shared by Swift Hibernian Lounge (@swifthibernianlounge) on Nov 6, 2016 at 1:52am PDT

Literary types will be well served here. When Danny McDonald opened his take on the Irish pub in 1995, he wanted to honor the things that made Ireland great — without the stereotypes. Swift Hibernian Lounge is named for the Irish writer and one-time vicar Jonathan Swift. Hence, patrons sit on pews from a church in his own County Meath, and no televisions will distract you from the solemn moment between a drinker and her craft beers, as well as whiskeys and reinterpreted dishes like corned beef and cabbage tacos. 34 E. Fourth St., NoHo