The Grumble: Metro readers sound off on "Phone Zombies" and people who are addicted to phones - Metro US
Grumble

The Grumble: Metro readers sound off on “Phone Zombies” and people who are addicted to phones There is no doubt that the invention of the smartphone has changed the way we live our lives for the better. Gone are the days when you could be arguing with a friend over whether or not Flea played bass on the second Mars Volta album and have it go back and forth for hours*.  Now you can just simply fire up wikipedia and solve the dispute in a matter of seconds. But at what cost are we paying for this convenience? Now, we are living in a world filled with people who are addicted to phones. Or as some may call them, “Phone Zombies“. Here are some of our favorite reader submissions to The Grumble about people who show no awarness to the outside world by being addicted to phones.

Addicted to phones — Where does it stop? 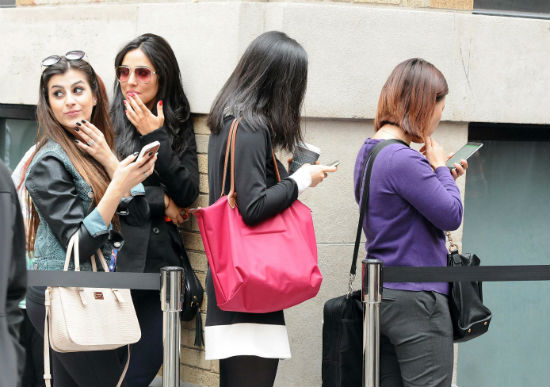 Are we addicted to phones? Photo Credit: Getty Images

So, let’s define the term “Phone Zombies” so that we can clear the air. A “Phone Zombie” is someone he tries to carry out their everyday life while staring down at their phone. This causes them to lose a sense of direction and walk sideways into people walking next to them or coming from the other direction. You know, like how a zombie would walk. This is a peak characteristic of people who are addicted to phones.

It is hard to believe so many phone zombies are still alive. Twice at the same corner while waiting within a small crowd for the walk sign I have seen one walk through us and go on into the street with head down to walk into a slow moving car,fortunately going slow after the intersection, then stagger on with head down. One ran into my shopping cart on a crowded sidewalk and never reacted to the wheels going over her foot. And coming toward me on the sidewalk when I am on the far right side means you and my cart are sharing the same space. Listen that cart can stop quickly but soon or later one of you will not stop fast enough while I am yelling to watch out and I am not going to be at fault for your collision. Look up, Zombies. Please.

By Margaret Hayward, Metro US reader

For most people out there who are struggling to keep their eyes off of their phones, the things they neglect in the process of checking their notifications can begin to add up. For instance, their children sitting next to them on public transportation ...

Avoiding your children with headphones

It really is annoying when a parent sits on public transportation with ear plugs in their ears and totally engaged in what is on their phone, while their children act like the vehicle is their own private jungle gym. Take the earphones off, turn off the phone and give your children the supervision they so desperately need.

And once you get to your stop on the bus, it just conitues on the street...

I cannot stand the self-important morons who walk and text. Just as bad are the ones who stop in the middle of the sidewalk to text or dial a number. If someone is walking towards me, there’s no way I’m jumping out of their path. I just wait until they are a few feet away and yell “heads up” loudly. Some times they almost drop their phones. Then there are the idiots that are crossing the street mid-block and texting away.

So, what can we do to ward off these "phone zombies" who are hopelessly addicted to phones? For those who have not fallen into the depths of this horrible affliction, having a heightened awareness of your surroundings may be your best bet. Perhaps you can set up an obstacle course in your backyard of person shaped figures made from couch cusions that you can juke as you run speed drills simulating your walk through the busy streets.

For those that may feel that they are too far gone when it comes to being addicted to phones, there is still time for you to take a step back.

Do you have any experience dodging "Phone Zombies"? Send us your stories to grumble@metro.us.

* Author's note: Flea did not play bass on the second album by The Mars Volta, Frances the Mute. He only played bass on the first album De-Loused in the Comatorium and played trumpet on two songs for Frances.

Juan Alderete was on low-end duties for the band's second album.