The “joke” about Pocahontas must’ve been such a big hit at the Trump Thanksgiving table, the president decided to whip it out again this time at an event honoring Native American Code Talkers who served in World War II.

Here’s the video: Trump calls Elizabeth Warren ‘Pocahontas’ while honoring Native American code talkers: “You were here long before any of us were here. Although we have a representative in Congress who they say was here a long time ago. They call her Pocahontas.” pic.twitter.com/hjZ5MInDDf

In front of a portrait of Andrew Jackson, the president responsible for the Indian Removal Act which brought the Trail of Tears, President Trump addressed the three Navajos.

“You’re very, very special people,” Trump said. “You were here long before any of us were here. “Although we have a representative in Congress who they say was here a long time ago. They call her Pocahontas.”

Turning to the veterans, Trump said, “but do you know what? I like you.”

Trump has called Sen. Elizabeth Warren (D-Mass.) Pocahontas on other occasions. Pocahontas was the daughter of a Powhatan chief. According to a Massachusetts genealogist, Warren is 1/32 Cherokee.

The word “Pocahontas” appeared 12 times on Twitter every second, according to social media analytics company Zoomph, Reuters reported. Some of the words associated with Pocahontas were “insulting,” “unfortunate” and “racist.”

Who are the Native American Code Talkers who served in World War II?

Code Talkers were bilingual Navajo speakers recruited by the Marines during World War II. The indigenous people helped pass messages the enemy couldn’t crack. The three men in the Oval Office on Monday are three of the remaining 13 Navajo Code Talkers of World War II. 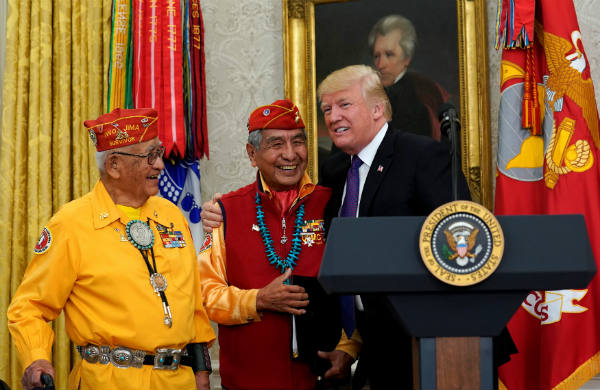 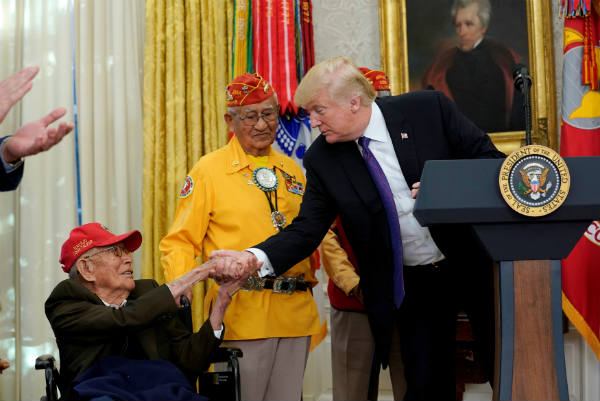 According to the president’s speech notes:

“Fleming Begaye is 97 years old, the oldest veteran of World War II. He survived the Battle of Tarawa. His landing craft was blown up and he literally had to swim to the beach to survive. Also, on Saipan, he also landed on Tinian where he got shot up real badly, survived one year in naval hospital.”

According to the transcript, the third Code Talker present was:

“Peter MacDonald. I’m the president of the 13 surviving Navajo Code Talkers. I went in — I’m 90 years old — I went in when I was 15 years old in 1944. I was with the 1st Marine Brigade on Guam, and then went on to North China with 6th Marine Division to get those Japanese in Northern China to surrender.

Norwood added that Trump should “stop using our historical people of significance as a racial slur against one of his opponents.” https://t.co/mUoCECxJxt

The three code talkers seemed to be the only people not to react to Trump’s remark. “This was supposed to be an event to honor heroes, people who put it all on the line for our country,” Warren said later on MSNBC. “It is deeply unfortunate that the president of the United States can’t even make it through a ceremony honoring these heroes without throwing out a racial slur.”

White House spokeswoman Sarah Huckabee Sanders fielded questions from reporters during the daily briefing and maintained that “Pocahontas” is not a slur… especially if the person deserves it.

“I think what most people find offensive is Sen. Warren lying about her heritage to advance her career,” Sanders told reporters.

According to the White House, using a slur in front of the very people you are disparaging is not offensive.

In a 2012 interview with CBS News, Warren said she checked off the Native American box in college hoping to find other students or a group like her.

“I listed myself directory in the hopes that might mean that I would be invited to a luncheon a group something with people who are like I am. Nothing like that every happened. That was absolutely not the use for it and so I stopped checking it off,” Warren told reporters in Braintree, Massachusetts.

“I have lived in a family that has talked about Native Americans, talked about tribes since I had been a little girl,” she later added. “I still have a picture on my mantel and it is a picture my mother had before that — a picture of my grandfather. And my Aunt Bea has walked by that picture at least a 1,000 times remarked that he — her father, my Papaw — had high cheekbones like all of the Indians do. Because that is how she saw it and your mother got those same great cheekbones and I didn’t. She that thought was the bad deal she had gotten in life.”

Trump also referred to chief of staff John Kelly as “chief” during Monday’s event in the Oval Office. “He’s the general and the chief,” the president said. “I said, how good were these code talkers? He said, ‘Sir, you have no idea. You have no idea how great they were.’”