What is the summer solstice? - Metro US
Lifestyle

What is the summer solstice? The summer solstice is today, June 21 — which, for many, is a time of celebration. There are local music festivals and other outdoor activities in its honor. Dunkin Donuts is even offering free bottle service. But, what’s all the hype about? And what is the summer solstice, anyway?

What is the summer solstice?

What is the summer solstice? For anyone living in the Northern Hemisphere, it’s the longest day of the year, and it marks the beginning of summer.

The summer solstice occurs when the sun is directly over the Tropic of Cancer (23.5° north latitude). If you were anxiously awaiting this moment, it already happened at 6:07 am ET. But, let’s break down what it means.

Summer solstice is the longest day of the year. But why?

NASA explains that the earth rotates on a tilted axis. It always points in the same direction as it orbits the sun, so “through the year, different parts of Earth get the sun’s direct rays.” In the Northern Hemisphere, June marks the beginning of summer because “the sun’s rays hit that part of Earth more directly than at any other time of the year.”

Hence, hotter weather (not that we haven’t felt it already).

The summer solstice is the longest day of the year because of this “peak” sunlight hitting the Northern Hemisphere.

Vox reports that, the further north you are, the more sunlight you’ll see during the summer solstice. (The Arctic Circle, for example, experiences almost a full 24 hours of sunlight).

Stephen Schneider, Professor of Astronomy at the University of Massachusetts Amherst explained in an article for The Conversation, that though the summer solstice marks the longest day of the year, it’s actually hard to tell.

“The sun’s angle relative to Earth’s equator changes so gradually close to the solstices that, without instruments, the shift is difficult to perceive for about 10 days,” he wrote. “This is the origin of the word solstice, which means ‘solar standstill.'”

According to Schneider, it takes about a week before there’s more than a minute change to the amount of daylight.

Where is the biggest celebration for the summer solstice?

One of the most well-known summer solstice celebrations takes place at the Stonehenge monument in England.

Stonehenge is a circle of standing stones in Salisbury Plain, and many believe that the people who built it over 4,500 years ago did so as a way to mark the changing of the seasons and to align with the sun.

During the summer solstice, thousands of people gather for pictures like this: 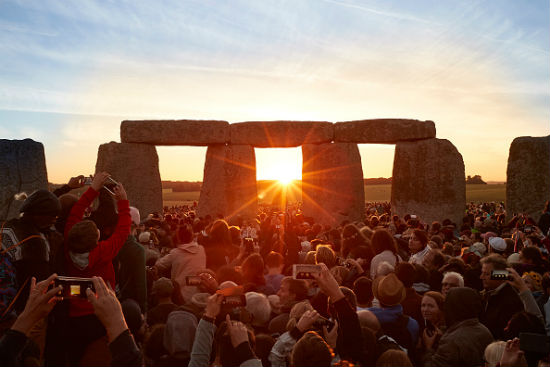 The Stonehenge summer solstice celebration attracts many people following the pagan faiths, too. Druids, for example, engage in group prayers.

But this is nothing new — the summer solstice has been observed since the Stone Age, according to History.com.

In parts of Scandinavia, people observed “Midsummer,” which included traditions like dancing around a maypole and drinking. Ashes from a Midsummer bonfire were said to protect you from misfortune, and it’s still celebrated today in Sweden.

As CNN explains, women would place personal belongings in a pot of seawater. They’d leave it under a fig tree overnight “where — folklore has it — the magic of the day imbues the objects with prophetic powers, and the girls in question dream of their future husbands.”

The next day, they’d take turns pulling out the objects and predicting “the romantic fortunes of the item’s owner.”

However you’re celebrating today — hopefully not with buckets of seawater, praying for love — we wish you a happy summer solstice!