E-cigarettescould be the key to finally ending tobacco smoking and all its related diseases. Or are they delaying the goal of a smoke-free world? The scientific community hasn’t rolled out the red carpet just yet.

We look at both sides, and talk to someone whose life has been totally transformed by vaping.

“An electronic alternative is a less harmful way of consuming nicotine than smoking,” acknowledges Hazel Cheeseman, director of policy at Action on Smoking & Health.

“What many people don’t realize is that while smokers are addicted to nicotine, it is the smoke that kills them. Consuming nicotine through vapor rather than smoke is very much less harmful.”

Cutting back on regular tobacco cigarettes can only have positive health effects — currently, smoking is the No. 1 cause of preventable illness and death worldwide.

David Sweanor couldn’t be more excited for e-cigarettes to make smoking obsolete. The professor of law who focuses on global health policy at the University of Ottawa sees the potential of e-cigs to save hundreds of millions of lives globally from premature death by cancer, heart disease, emphysema and other diseases caused by smoking.

“For people who can’t or don’t want to quit using nicotine, e-cigs offer a lot of what users like about smoking: the nicotine, the hit to the throat, taste and something to do with their hands,” he says. “Yet it does this without the risk of serious disease or some of the anti-social aspects of smoking.”

But not everyone is buying the e-cig promise. Studies so far indicate that only a small number of regular smokers successfully wean themselves off from cigarettes using e-cigs, points out Jonathan Winickoff, chairman of the American Academy of Pediatrics Tobacco Consortium and a professor at Harvard Medical School.

For the rest, “using both cigarettes and vaping together might facilitate some continued tobacco use, rather than complete cessation that might have otherwise occurred,” he says. That process even has the potential to work backwards, too: “Young people who vape may become addicted to nicotine and then go on to smoke regular tobacco.”

RELATED: A step-by-step brain workout to get you motivated

A nationwide study last December found that more teenagers are vapingthan smoking regular cigarettes; among 8th and 10th graders, e-cig use was double that of traditional smoking. According to the Centers for Disease Control, from 2012 to 2013 e-cig use by high schoolers rose 61 percent.

All of this is happening while the FDA’s Center for Drug Evaluation and Research still has not approved a single e-cigarette as a safe and effective method to help smokers quit, according to the American Lung Association. Winickoff points out that vaping devices are still not as healthy and breathing clean air.

“[E-cigarettes] do in fact contain harmful chemicals — like formaldehyde, which is a known cause of cancer — as well as ultrafine particles that get deep into the lungs, only to worsen breathing problems.” 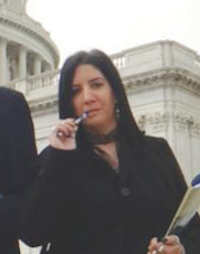 Though Babaian was nicotine-free for almost 18 months, she was “not a happy person” without it, so she found the lowest-dose e-cig that contained nicotine and continues to use that now.

The difference it made in her life led her to co-found the Long Island Vapers Club, which advocates against regulating e-cigs, which Babaian says would “delay the evolution of the product. …I spend every minute I can trying to keep e-cigs legal and available in every state and country.”