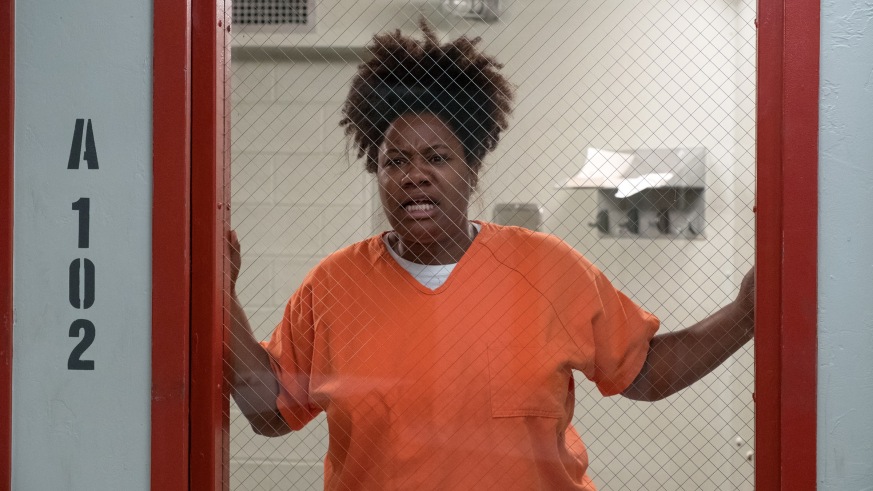 In Orange is the New Black season 6, Cindy “Black Cindy” Hayes (Adrienne C. Moore) has a problem. She and her fellow former Litchfield Penitentiary inmates are now on the other side of last season’s devastating prison riot, and the authorities are looking for someone to blame.

Sure, Cindy had a hand (and several lattes) in orchestrating and prolonging the riot, but the district attorney’s office is also trying to figure out who did something even more heinous. Something, as it turns out, that Cindy secretly witnessed.

Adrienne C. Moore on Orange is the New Black season 6

“We’re introduced to her as this sort of laissez-faire, humorous girl who takes life by the seat of its pants. She doesn’t really take things seriously,” says Moore. “But as we peel the layers back each season, we see the depth of her, the hurt and the conflict. We see, even in this season, how Cindy running her mouth can sometimes get her into trouble.”

Much of this is due to her performance, of course. Yet Moore, who originally got her start in the theater, credits Orange is the New Black creator and showrunner Jenji Kohan’s with Cindy and the other characters’ depths. “She allows the humor and comedy to come together, to disarm you and let you sit back in the story,” Moore explains. “When we deliver these very profound, dramatic and gut-wrenching moments, or talk about topics we see on the news everyday, Jenji’s masterful writing helps us deliver.The comedy allows for the dramedy, or the drama, to be seamless.”

That Moore drops the word “dramedy” into the conversation around Orange is the New Black season 6 is telling, considering the reception of the Netflix show and others like it in the wider television community. Kohan grappled previously with the genre conflation in Showtime’s Weeds, and popular, critically-acclaimed contemporary series like Donald Glover’s Atlanta are doing the same.

“I love working in that blend, because I think that’s what life is,” says Moore. “If you look at when people talk about theater and art and acting, you see the sad and the happy faces. I don’t think life is like that. Life is a compilation of both. ‘Orange’ will probably be long gone by the time they make a category for it in the awards show, but I firmly think it’s time, now with all of the things that are coming out and how storytelling has changed in the past few years. It’s continuing to change.”

One of the more recent examples of this change occurred shortly after the film The Martian was nominated for, and won, a Golden Globe for Best Picture in the comedy category. The Hollywood Foreign Press Association changed the category rules shortly thereafter, but the damage to the increasingly fraught genre distinction was already done. And as great as television shows like Weeds, Atlanta and Orange is the New Black are, their categorization continues to confuse many in the industry.

“At the Screen Actors Guild Awards, we’re in the comedy category, but at the Emmys we’re in the drama category,” says Moore. “Look, I’m biased but I think Orange is one of the best shows out there. Then again, Game of Thrones is a very dramatic show, so it’s kind of hard to compete with the drama of a show like that when they’re cutting off people’s heads and stuff. We’re not cutting off heads.”