With the Persian Gulf to one side and the desert on the other, the United Arab Emirates capital is one of the world’s best destinations for adventure travelers.

With soaring glass spires and opulent hotels, Abu Dhabi has earned its reputation as one of the world’s up-and-coming cities. And because of the vast urban landscape, it’s easy to forget that the world’s largest uninterrupted desert — the Empty Quarter — is located just outside the city limits.

In Abu Dhabi, you can drive a Ferrari, ride the world’s tallest roller coaster loop, go dune bashing, wakeboarding or quad biking … it’s all or everything in this record-smashing city. 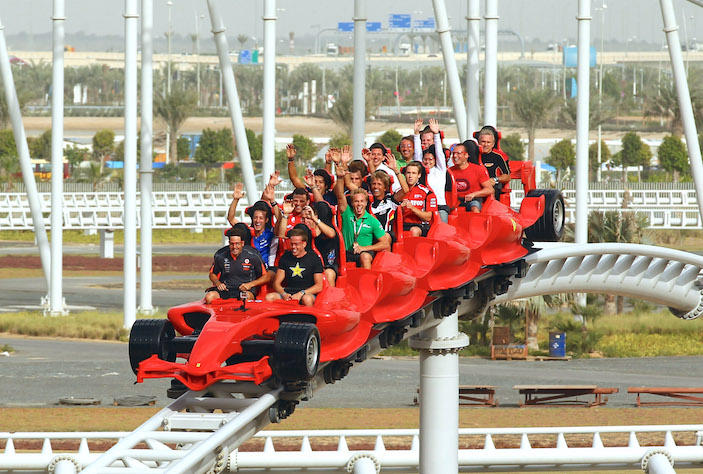 There aren’t many places on earth where you can zoom 150 miles per hour in a Ferrari, and experience the world’s highest non-inverted loop roller coaster all in one afternoon. Then again, Ferrari World isn’t your usual theme park. The high-voltage complex is home to the Formula Rossa, the world’s fastest roller coaster, reaching 149 miles per hour in less than 5 seconds. It emulates the g-force sensation of an F1 racer, blasting off from the starting block, then twists and turns at high speeds as if following the curves of a race track. The park recently opened its latest thrill: Turbo Track, which lets riders experience a Ferrari Test Driver sensation as they endure a hair-raising “zero gravity fall.”

Insider Tip: In case you’re traveling with little ones, there’s a Junior Grand Prix for kids that includes a demonstration with a trained expert, followed by a tot-sized Ferrari F1 racecar and a few loops around a mini track, in addition to many family-friendly simulation-based rides.

Keen to zip around a real F1 track? Book an afternoon on the Yas Marina Circuit, where the Formula One races provide the opportunity to experience life in the driver’s seat. The adventure begins with a test drive, a trip to the pit, and a tutorial, followed by a few laps in your choice of race car, from Formula YAS 3000 to an Aston Martin GT4, Ferrari 458 GT and a Jaguar F-Type S Coupe.

Insider Tip: Yas Viceroy Abu Dhabi is the go-to if you’re hoping to stay close to the action. The hotel is built alongside the race track, and offers F1 packages that include access to the weekend’s lineup, including concerts and event passes from November 24-26, 2017. 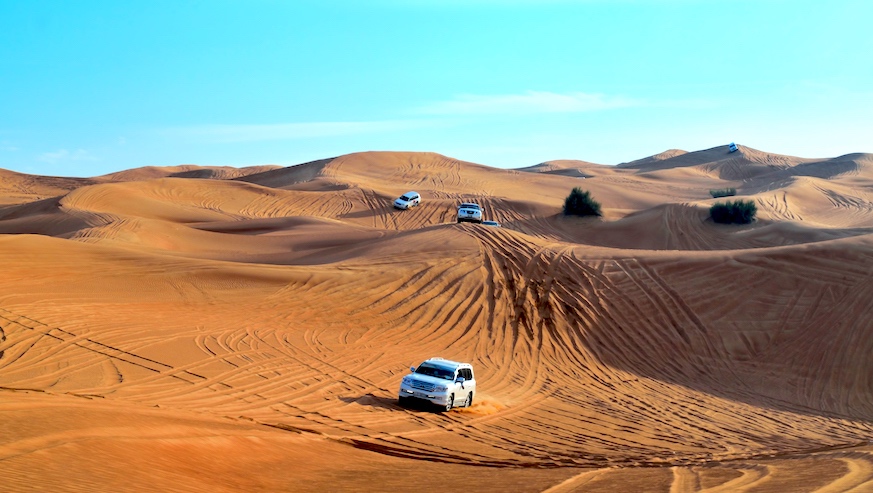 Just an hour outside of Abu Dhabi, the Al Khatim Desert sprawls in all directions. It’s a quiet escape from the city, with beautiful dunes that seem to roll like waves toward the horizon. Trips with Nuzhath Ideas Abu Dhabi Desert Safari take travelers into the vast sandy expanse for safaris and “dune bashing.” Beginning with a drive through the desert, a Toyota Land cruiser will take you crashing into the top of the desert’s highest dunes. Moving on, travelers can strap up to try sand boarding, which entails riding a snowboard or a sled down the steep, sandy mounds. The afternoon also includes a camel ride, a visit to a traditional Bedouin Camp, belly dancing, shisha, henna, and an Arabic barbecue.

Insider Tip: The experience is best enjoyed from October to February when the weather is mild and fewer sandstorms occur.

Get Up Close and Personal With a Bird of Prey

Practiced for centuries in Abu Dhabi, falconry played an important role in the country’s desert past and remains a symbol of courage and strength. Historically, the powerful predators were used to help hunters track small animals, adding protein to their diets. At the Anantara Sir Bani Yas Island Resort, you can learn the ins and outs of training this fierce animal with the help of a professional handler, who practices traditional telwah techniques. During the demonstration, the falcon swoops into the air at a speed of up to 223 miles per hour, only to return to its trainer’s arm with a soft landing. After the demonstration, guests can try their hand at holding and feeding the falcons.

There’s also the dedicated Abu Dhabi Falcon Hospital, where visitors can learn about the rescue and rehabilitation of these majestic birds. The hospital is one of the largest avian institutions in the world, and cares for as many as 6,000 falcons a year, checking everything from health issues to missing flight feathers. 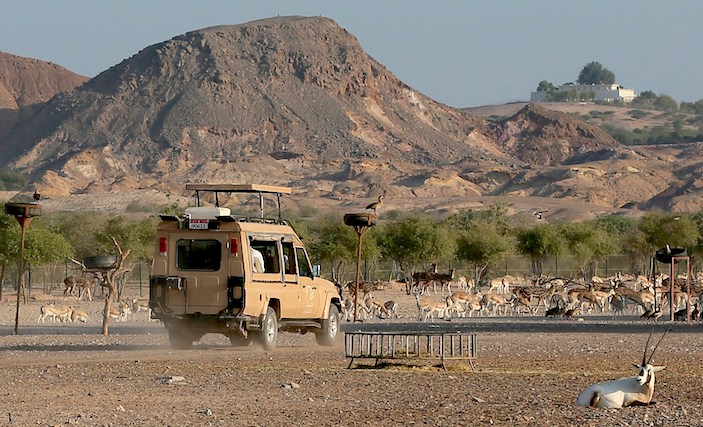 Abu Dhabi might not be the first place you’d think of when planning a safari experience, but the territory’s wildlife game is surprisingly ferocious. On Sir Bani Yas Island, the Arabian Wildlife Park offers up-close and personal encounters with more than 10,000 free-roaming animals. From viewing platforms scattered around the park, guests can look majestic giraffes straight in the eye, and survey the landscape for gazelles, hyenas, cheetahs, and the Arabian Oryx — the national animal of the UAE, which resembles an antelope.

Keen to hit the ground in a 4×4? Guests who stay at Anantara Sir Bani Yas Island Resort or Danat Jebel Dhanna Resort can book safari excursions with a wildlife guide.

For the rest of the most hair-raising things to do in Abu Dhabi, like surfing the world’s largest man-made wave, visit Fodor’s.