How Adam McKay makes us root for Dick Cheney in Vice

We have a devastating bout with the flu to thank for piquing Adam McKay’s interest in turning Dick Cheney’s life story into Vice.

After his work promoting The Big Short, which resulted in him winning the Best Adapted Screenplay Oscar, McKay found himself bed-ridden.

“So I just looked up at the book shelf and thought, ‘What am I going to read?’ Someone had given me a book on Cheney and I had always been interested in him,” McKay tells Metro. “He is so enigmatic and shadowy. Once I started reading it I realized how wired he had Washington DC and I realized it was an American epic.”

Trying to make a compelling and entertaining movie of Dick Cheney’s life also immediately presented McKay with the same challenges he’d confronted on The Big Short.

“I love stories about people or things that are boring and that we’re not supposed to care about but that we actually should care about,” admits McKay. “Cheney has done everything in his life to not have a movie made about him. His autobiography is so dry.”

That, as well as McKay’s own political allegiance, his obvious disdain for Cheney and what he has done to the country and his auteurist approach to making bombastic, confrontational and eye-opening films, unsurprisingly meant that he never even considered approaching the Cheney family about the film.

“If we’d try to go through they Cheney’s we’d have been dead in the water immediately.”

So McKay hired a journalist that spoke to and interviewed people from every different aspect of Cheney’s life, from professional associations to friends to distant friends and even people from his old town. None of them on the record, “just to confirm what we were doing and that we weren’t crazy.”

McKay then made it his mission to make sure that viewers never found Vice as dry and dull as Cheney has tried to make his life seem. Not only does he play with the structure throughout, he uses a mysterious narrator, some characters break the fourth wall, and Dick and his wife Lynne even use Shakespearean dialogue for an entire scene.

“I am just trying to always show the stakes of what is happening and get away from his preconception the audience has that politics is boring,” McKay explains of style. “The way I did that was to bend and play with the storytelling.”

“The audience feels relieved when this stuff happens. Because they’re like, ‘Wait, is this a dusty old biopic?’ Then we would screw with it. And they’d be like, ‘Oh wait, there’s some newness going on here.’” 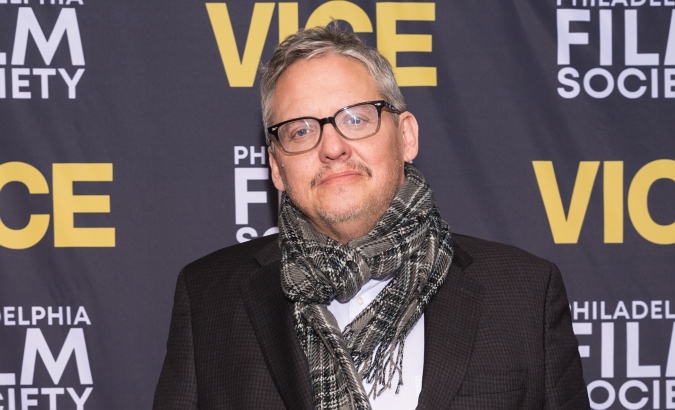 McKay still turned to a number of movies for inspiration. But it was in the Italian biopic Il Divo, which turned “bureaucratic stiffness into bad-ass power,” and the work of Martin Scorsese, particularly Goodfellas, where McKay sees the most parallels with Cheney and Vice.

“The through line that made it all connect is power. Much like Goodfellas or Casino. It is the same kind of arc. You’re kind of rooting for them. You want them to get the power. They get the power. It is really cool. But then you’re like, ‘Wait, Ray Liotta’s a murderous gangster. Why am I rooting for him? But boy they’re having a blast.’”

“This seems to follow that same arc. Because audiences are rooting for them when they’re in the Ford White House, taking over, and then rooting and laughing when he is baiting George W Bush. It is really interesting. We root for it, while at the same time it is destroying us.”