Is FX's 'The Americans' based on a true story? - Metro US
Television

Is FX’s ‘The Americans’ based on a true story? The FX Network’s slow-burning sexy spy drama The Americans is returning Wednesday night for its final season. The parallels between the show and what has been going on in our country have been eerily close. Since the show premiered, we’ve inched closer to a new era of the cold war with Vladimir Putin’s Russia. Are there spies amongst us like Keri Russell and Matthew Rhys’ Elizabeth and Peter Jennings secretly seducing their way to the most hush-hush of all American intel? It all begs the question: is The Americans based on a true story?

Based in the early eighties, the show is set in the height of both American fashion — oh, so many windbreakers — and the cold war between our country and the Soviet Union. The show’s heart bleeds that aesthetic down to a tee. Given that the red scare was very real in the minds of everyday American citizens through the Reagan years, the show must have taken its cues from a real story, right? Is The Americans based on a true story? Here are two different married spies that prove that the show the Americans is a little more real that you’d like to believe.

Is The Americans based on a true story? 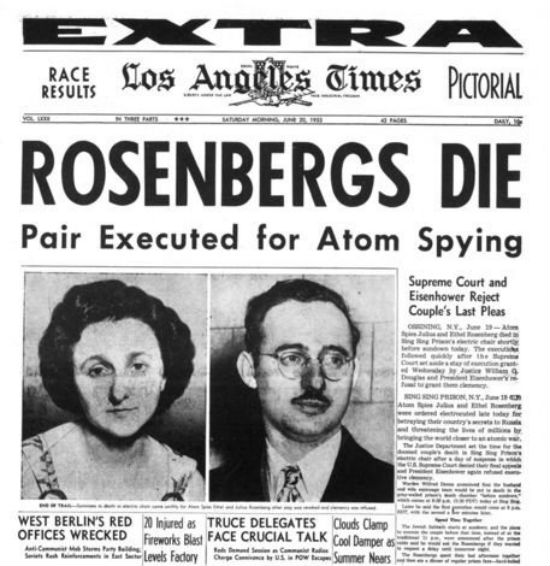 Though they were not active in the same time period, this couple is a huge inspiration to the kind of “hiding in plain sight” spies that Elizabeth and Peter are on The Americans. Ethel and Julius Rosenberg were two seemingly normal American citizens who were tried and executed by the United States government for leaking blueprints for nuclear weapons to the USSR in the early 1950’s.

The Rosenbergs were not Russian citizens who made their way into America to infiltrate the system like the Jennings, as they met at a Young Communist League and were contacted by the KGB further down the road. But what really draws the parallel between this couple and the show is that they had tried to pass as a seemingly normal American family with two young children all while attempting to take down our country from the inside.

In a declassified KGB file some years later, it was also revealed that Ethel had been the badass of the couple — much like Elizabeth on the show — and had been at many decision-making meetings with the Soviets and was instrumental in their gathering of top secret information.

Donald Heathfield and Tracy Foley, or better known as Andrei Bezrukov and Elena Vavilova, were two undercover Russian agents belonging to what was called “The Illegals Program” by the U.S. government, and were caught by the FBI along with ten other agents in 2010.

“The Illegals Program” was a widespread network of sleeper agents who would try to set up meetings and deals with defecting U.S. government employees and Russian contacts. They were also highly trained for battle in case tensions between Russia and the United States ever boiled over into all-out war.

Heathfield, or em, Bezrukov had started a consulting business in Boston much like Peter’s Travel Agency on The Americans, and the couple had two children who knew nothing of their spying activity.

So, is The Americans based on a true story?

Well, if you want to know if Russian spies have been hiding amongst us and trying to undermine our democracy from within? The short answer is: yes.

But hey, with all of the news about Robert Mueller’s investigation unfolding, it seems like all the Russians needed was a few million well-timed Facebook posts to really stir things up.

The final season of The Americans premieres Wednesday, March 28th at 10 pm on FX.