MLB commissioner Rob Manfred revealed during Tuesday night’s All-Star Game that the league is considering expanding from 30 to 32 teams. And he didn’t hold back in listing potential markets. 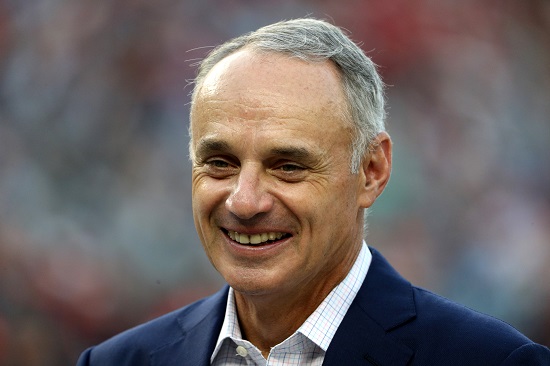 “We have a real list of cities that I think are not only interested in having baseball, but are viable in terms of baseball,” Manfred said (h/t Nashville Business Journal). “Places like Portland, Las Vegas, Charlotte, Nashville in the United States, certainly Montreal, maybe Vancouver, in Canada. We think there are places in Mexico we could go over the long haul.”

Major League Baseball has not expanded since 1998 when the Tampa Bay Rays and Arizona Diamondbacks were introduced. It came five years after the Miami Marlins and Colorado Rockies broke into the league in 1993.

Since 1961, the league has introduced 14-different teams with general success. Only two of them, the Montreal Expos and Washington Senators, relocated. The Expos moved to Washington D.C. to become the Nationals after the Senators moved from the nation’s capital to become the Texas Rangers.

So that got us thinking, what could be some possible names of the teams from these prospective baseball cities?

Metro takes a preliminary and all-too-early look at what could be expected:

Why: The Beavers were the name of the Portland’s Pacific Coast League franchise from 1903-2010, winning nine league titles in the process. They were the feeder team for 11 teams during that time. The Beavers featured some notable names over their history including Hall of Famers Mickey Cochrane and Satchel Paige.

Lou Piniella was a Portland Beavers player from 1966-68: pic.twitter.com/Y7S9i60tjI

Why: This was a name I actually liked for the NHL franchise before they were named the Golden Knights. The Outlaws harken back to an old “Wild West” feel and would further add to the city’s bad-boy persona once the NFL’s Raiders arrive in the city. Imagine if they could get hometown hero Bryce Harper, too?

Why: A wren is a type of songbird found in the Carolinas and offers something different from your run-of-the-mill animal mascots. It’s a specific mascot that will immediately link the hometown fans to the club.

Why: Sure, there could be a country music theme here considering the Titans and Predators both missed out on the opportunity. But that’s too cliched. Cracker Jacks would be a combination of Tennessee’s two finest exports. First, the restaurant Cracker Barrel was founded in Tennessee with its headquarters in the city of Lebanon. More famously is the whiskey brand Jack Daniels, which was founded in Lynchburg.

Why: No other name would suffice here. The Expos should have never left Montreal and they still have an incredibly strong following there. You have the logo and uniforms all there waiting for you upon your return, baseball. No pressure.

Why: Besides maple syrup, moose and apologizing, mounties are synonymous with Canada. Mounties was also a name of the Vancouver’s Pacific Coast League franchise which played from 1956-1969.

Why: Mexico City isn’t too far-fetched an option for Major League Baseball. In 1994, Alfredo Harp Helu submitted a bid that included a domed 50,000-seat stadium only for the league to award franchises to Tampa Bay and Arizona the following year. Mexico City was the epicenter for Mexico’s War of Independence against Spain in the early 1800’s. It is also the home of the Angel of Independence, a victory column in the heart of the city.